Introducing talented teen illustrator Kodi Murray. You may have noticed his Sir Julius Vogel nominated art work on the cover of Beyond the Stars, the intermediate school writing anthology edited by Chad Dick and myself. Kodi stops by to tell me about his passion for spaceships, Star Trek and Harley Quinn.

Love your work Kodi! So, when did you realise graphic art was what you wanted to do?

I realised when I discovered that it is an actual career. I used to get in all kinds of trouble with my teachers in high school for drawing instead of doing work. Some time around year 10, when I was 14 or so, I discovered that nearly everything manmade had an artistic influence somewhere along it’s life, and to that point no one could stop me being artistic if they wanted to. I got very anti-authority in high school, but I argue that’s an artist trait, to be challenging.
Tell us about what you like to draw most and why?

I can (begrudgingly) say the thing I draw most is spaceships – all kinds of spaceships, sleek ones, bulky ones, one’s designed to serve a purpose, some because I just like looking at them. It’s heavily imaginary. I always imagine myself on board or flying these spaceships I draw and it’s a surprisingly broad topic – spaceships in art (and by extension film and tv) can vary all he way from steampunk era cruise ships (in space of course), all the way through the 60’s era space capsules, up to the far-out Star Trek future-sci-fi. Hopefully this doesn’t read like one of my nerd rants, I could go on for some time about this…

What inspired you for the Beyond the Stars book cover?

The cover I produced for Beyond the Stars was actually inspired by a short film I found on Vimeo called “Wanderers”, which showcased our Solar System and speculated on the future of human space travel, acco 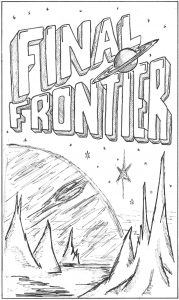 mpanied by the commentary of Carl Sagan. I adapted the imagery of the view of Jupiter from the surface of the ice moon Europa from the short.

Who’s your favorite artist and why?

My favorite artist (since I very recently discovered his work) is Greg Broadmore, most notably for the Dr. Grordbort series of graphic novels, and his work for Weta Workshop on films like District 9.

Tell us about your science fiction obsessions… 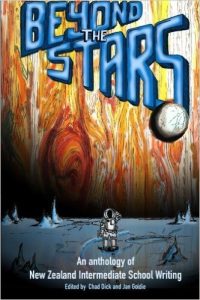 Beyond the Stars, edited by Chad Dick and Jan Goldie

The fascination with science fiction comes from a long time ago, I think it was Apollo 13 that got me interested in space travel and spaceships and such. Star Wars after that, then I saw the 2009 Star Trek reboot and was mystified by the idea of Starfleet and the Enterprise, and I’ve been a big fan ever since. Star Trek isn’t for everybody, and not all Trekkers like all of Star Trek- I’m a dedicated Original Series fan. For me science fiction is escapism, and the prospect of going somewhere completely new and exploring and seeing things that you can’t see anywhere on Earth.

If you could take a long haul trip in first class to any destination of your choice and choose a fictional character who would sit/stand/party next to you in the plane, who would it be?

Without thinking it through I’d probably jump at the chance to sit next to Harley Quinn on a plane, but a little more considered I would say Wash from Firefly? He’d be a laugh and probably pretty easy to get along with- not to mention Alan Tudyk is one of my favorite actors!

If you could be any Star Trek character who would it be?

If I could be any Star Trek character? Tough one, but I think I would have to say Captain Kirk if I may be so cliché. Despite the obvious fact of being the captain of a gorgeous starship and exploring the galaxy with little to no fear of the unknown – he also inexplicably gets the girls! Whether or not they’re even human! I find that particularly admirable, *winks*

Where are you studying now? 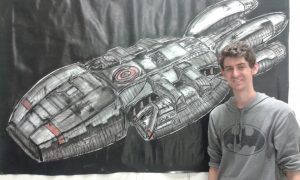 I am studying for a Bachelor of Media Arts at Wintec. I have about a year and a half left to go, I haven’t really chosen a major because it’s hard to narrow it down. I could do Painting, or Film or Fine Art but the field I actually want to major in falls down the gaps between these subcategories. I’d love to major in Illustration but seeing as it falls (helplessly) between Fine Art and Design/Painting, it’s hard to convince my tutors. I’m not approaching my course in a very cohesive way, I enroll in classes as they’re brought to my attention, which keeps me doing only the classes I want to do.

What’s next for you?

For personal work… I plan to start producing my own Retro-futurism/’Atompunk’ comic book series based around a spaceship I have used across several assignments so far this year, called Nova. Beyond that it’s just keep my head up and see what comes along!

Thanks Kodi. Find out more at www.behance.net/KodiMurrayNZ