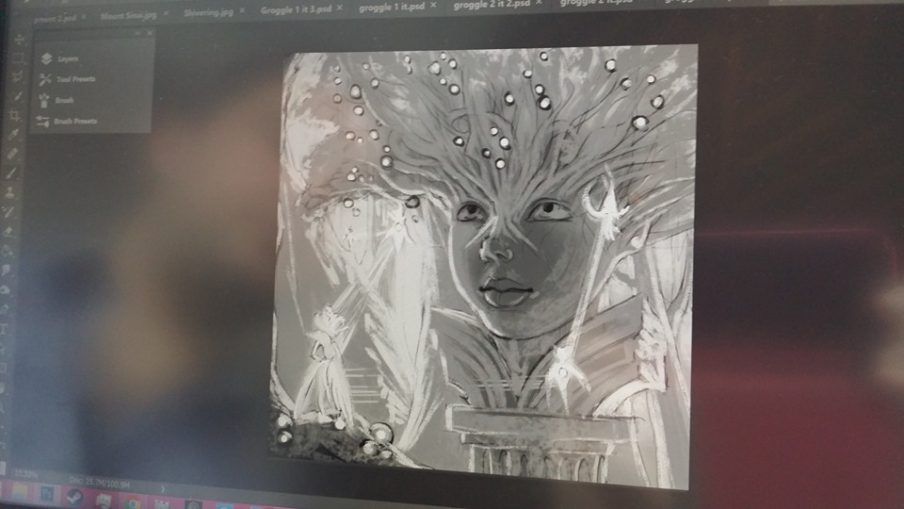 Picture book creation is a much longer and more complex process than I ever imagined. So much work goes into the story, but that’s only the beginning. Next comes the difficult job of deciding what images and where. How much to reveal? What other characters and themes and ideas and jokes can be hidden on the page to create further interest? What is the setting? What season are we in, this effects the light, the weather, what the characters wear… So, here we are again at Elizabeth Street Cafe! It seems to be the creative hub for Groggle and the Chubbly Fluff this year. Plus it has fantastic organic coffee and a great atmosphere!

Earlier, Kris and I worked on story boarding to give us a ‘big picture’ idea of where the book might go. This mostly involved me drawing stick figures next to my text, with occasional attempts at an illustration. Followed by Kris elaborating on th is in a much more professional way. And now we’ve reached the point where he’s creating full size and double page spread renditions. Although he’s only made a couple in colour so far, the basic sketches are all in black and white. Personally I can’t wait to see the depth and richness that colour will bring to the story. This image shows the chubby fluff’s face in close up, but in face it’s not her actual face. This page suggested that she was sculpting an image of herself out of a tree! 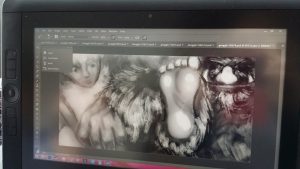 The image below shows Groggle displaying his uncharacteristically clean feet to CF. I love the close up of the sole of his foot in the foreground and how squashed into the space the two of them are.

It’s all still work in progress but every time we meet, the project becomes more and more exciting! Watch this space.